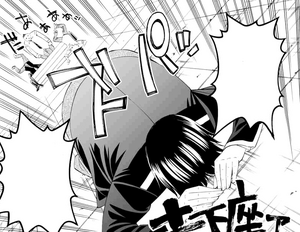 Dogeza (土下座 "sitting right on the ground") is an element of Japanese etiquette where an individual expresses a subservile attitude by kneeling deeply on the ground on hands and knees and bowing low enough to touch one's head to the floor (effectively exposing one's neck to possible attack from a sword).

The action is among the lowest/deepest forms of prostration known and can be used to show deference to the most highly-revered high-class person, as a deep apology, or to express the desire for a favor from said person (ie begging). Usually, this action is performed with complete disregard to ones own shame/pride and is seen akin to groveling/begging in modern times.