Great Settlement of the Bird Race

Edit
watch 01:40
The Sandman Will Keep You Awake - The Loop
Do you like this video?
Play Sound 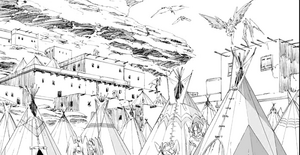 The Great Settlement of the Bird Race is a Autana settlement built over the ruins of an ancient citadel.
Once one of many Harpy/Hawkman settlements throughout Re-Verse, the Great Settlement has become more or less a refugee camp, containing citizens from numerous Harpy and Hawkman villages.

Occupied by the Harpy and Hawkman race, at first glance there is no visible sign of the ancient ruins the settlement was supposedly built upon, however, a large underground chamber within the settlement serves as an evacuation shelter.
Two giant walls that barricade the only land path that lead from the nearby forest to the settlement are also remnants of the former citadel.

Normally the cliff and the dense forest acted as barriers to prevent intruders from reaching the land path and the settlement. As a result, the settlement's defenses were meager, possessing no firearms or artillery, and only a few outdated ballista and a lookout tower.

As the Harpy and Hawkman people are fundamentally hunters, they possess little interest in building and as a result the settlement's buildings are simple, made primarily of mud walls and bricks, with perches set up on the walls of most buildings for citizens to perch upon.
Recently, due to the Gigas attacking bird man villages, tents have sprung up within the settlement to house refugees.